A  for APF  (Asian Paradise Flycatcher)

Exciting isn’t it?  The bitter truth is, “till how long  will it sustain?” In the name of development, we are spreading faster than the Ebola virus capturing every nook & corner of the city. Kanakpura, probably one of the last few sections of green corridor near Bangalore, has been invaded by urbanization. Amidst all these developments and encroachment of forests, a patch of      forest area is still holding its ground. I am talking about that section of forest which is near “The Valley School”, Kanakpura Road, Bangalore. I fondly call it “Bangalore’s  Own Bird Sanctuary”. It falls on the B.M. Kaval reserve forest area. Before entering into the jungle, you need to register your name in a book that is maintained by the school authorities.

The area is surrounded by different kinds of trees like Amaltas, Gulmohor, Jacaranda etc. along with bamboo bushes. The place  is perfect for birds to perch and make their nests. In fact almost every tree is filled with the feathered creatures that sing the ode to the morning sun. You will be lost in the whirl of the wings. Come early, you can see the peafowls roosting somewhere nearby. It may be a common sight while on a jungle safari but not in an urban jungle. More often than not you can see them right after taking a couple of steps into the jungle. If you are lucky enough, chances are high that you can say hello to even the Indian Grey Hornbill!

People come with their kids to introduce them to birding, which is very encouraging to see. Some organizers even schedule bird-watching events for enthusiasts. Bird-watching is not restricted to any age-group, it’s a gift from nature which  everyone can and should cherish. You will pass by a big banyan tree if you proceed towards the denser part of the forest, where sightings of woodpeckers are quite common. In some parts of the forest, the trees form such a dense canopy that  sun rays can hardly sneak through. If  you go a little deeper into the forest, you have a good chance of getting a glimpse of the Blue-faced Malkoha, the Asian Paradise Flycatchers, the White-Spotted Fantail or even a Black-Naped Monarch, if you are extremely lucky!

Not only birds, the forest is also home to different kinds of reptiles, bees, lizards, small mammals and butterflies. Some sudden movements in the bushes, and you could see an Oriental garden lizard darting into the wilderness. Even leopards and elephants were sighted last year, and so camera    traps are being installed in some parts of the jungle to keep a track of them.

It is indeed very significant to protect not only this place, but also its surrounding areas so that the birds and animals may thrive. Less than a decade ago (2008), the forest adjoining the school was marred by heavy encroachment; the Forest Department eliminated the encroached buildings. In fact you can still see the abandoned buildings standing still amidst the forest. Many of these have now become roosting places for the birds as well as the birders! Other than the encroachment issues, I still see  broken glass shards and cans being dumped at places. The last time I went there, some part of the bamboo bushes were half burned, reason  being still unknown. Such events open up our eyes to the fact that we are losing natural habitats everywhere, and this kind  of destruction,we cannot afford anymore.

Probably it is time for the forest department and citizens like you and me to not only claim it as their own land but treat it like own home too. This place has been my  favorite birding place for a couple of years now. I am sure there must be many other photographers or birders who come here not only to click our feathered friends but also to get to know and understand them  better. The very beauty of birding is that you need not have to visit sanctuaries or go for jungle safaris to learn about them.  You can visit any birding hotspot in your cities/towns or even in your  backyard or garden. You will find them singing and jumping around the trees.

But what if we start losing these birding  hotspots itself? – A topic to ponder about!! This reminds me of one of the quotes of Dr. Salim Ali, well-known Indian Ornithologist and recipient of the prestigious Padma Vibhushan: “People say you can’t make a living from bird-watching. That’s perhaps true. But, it is also true  that man does not live by bread alone. Just look at the people who have no such hobbies and spend all their time solely on  earning a living. After 60, when they retire from official chairs, they don’t know what to do with all the time in their hands and just  spend it watching the clock! If they had cultivated a hobby like bird-watching, perhaps they would have lived longer to enjoy their pension”. 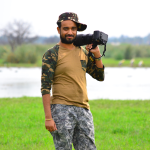 About the Author / Debashish Das

An engineer by profession while photography is my passion. Always on a lookout to be in the lap of nature & spend time with mother nature as much as I can. Birds are the subject that interests me the most & whatever comes between us doesn't get missed too. I believe everything around us has a story, well I am the story teller.