A growing metropolis is a death sentence for the local fauna living at the confluence of concrete and green jungle.  Man-animal conflicts on the periphery of Mumbai, Gurgaon are daily occurrence due to shrinking habitat. With that disturbing background as my knowledge base, the Skyscraper Capital of Middle East Dubai was the last place I expected a success story of conservation of wetlands and its flamboyant residents, the Greater Flamingos.

As the city of Dubai grew in every possible direction, a conscious decision was taken to leave the wetlands formed by at the tip of Ras Al Khor creek and preserve its delicate ecosystem that not only gives much sought after feeding base to the Flamingos but also is a safe haven for common hoopoe, Asian Pied Myna, Great White Egret, Purple Sunbird, Spotted Eagle, Common Kingfisher, Socotra cormorant among birds and many amphibians. But it is the Greater Flamingos that caught my attention from a distance as I saw a flock moving and asked my driver to take me back so that I could see them from a close distance. To my utter surprise, the Dubai Municipality has carefully fenced the area to avoid human encroachment and trespassing and provided 3 air-conditioned watchtowers with a good vantage point to look at the birds. A pretty smart decision I would say as sitting in Air-conditioned tower you do not have an incentive to go out and disturb the birds that oblivious to your presence in the camouflaged towers are at their natural best.

As you watch the flamingos move in a wave looking for food in the shallow waters, you are totally in awe of the scene in front of you. Right in front of you are one of the most magnificent birds in the world and right behind them are some of the tallest man-made buildings in the world including the tallest one, The Burj Khalifa. A busy freeway separates the Dubai Skyline from the Ras Al Khor Wildlife Sanctuary, and Ramsar wetland site. Looking at the location of the Ras Al Khor Wildlife Sanctuary and the efforts Dubai Government continues to protect and nurture its first Ramsar Wetland site one cas safely say that this is one of the best examples I have come across conservation within the boundaries of a global city.

Sitting in the comforts of watchtower yet so close to the birds that even your puny 300 mm lens can take close-up shots without disturbing the birds you are within ear shot of listening to the continuous sounds made by the Flamingos. It is a great way to observe their behavior. Some of them are definitely aggressive and only want the spot that the other birds are occupying. While a few engage in friendly neck wrestling kind of ritual which could be a precursor for a full-fledged breeding rights battle. Other birds maintain a respectable distance from the Flamingos for any of them that try to come close is met with a collective call to leave or face consequences.  Once the intruder is gone, they are back to looking for food in the still waters that act like a perfect mirror creating a chimera of reflections.

Reflection of Flamingo in water

You may wonder why these Greater Flamingos are not pink as you see in the animation movies. Well, the reason is that those movies typically show birds from Central America which feed on a diet that is rich in bacteria with beta-carotene like compounds (something similar to what gives carrots their color). The food at Ras Al Khor is more of local worms and insect larvae in the brine waters thus more subtle colors of the Flamingos of Dubai.

When to Visit: These Greater Flamingos are resident of Ras Al Khor, and large flocks can be seen year long. Some of these birds are believed to be flying as far as to Abu Dhabi for breeding and return back for feeding.

Entrance is free for all and timings are 9 am to 4 pm, Saturday through Thursday. 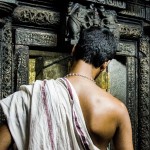 About the Author / Prasad Np

Prasad Np is passionate about wildlife protection; he pretends to be a photographer and celebrates wanderlust as desi Traveler by writing about his travels and conservation issues.

In a successful joint operation led by Delhi Zoo and Wildlife SOS, a Greater Flamingo bird that

One of the most vibrant migratory bird to brighten the Indian subcontinent, the Greater Flamingos(Phoenicopterus roseus) are

Secrets from the coast

Virtually unknown to tourists and outsiders, the tiny beach town of Motwa along the Gulf of Kutch