After completing my 1st year in Masters in wildlife sciences I had summer vacation of 2 months, so I decided to do some kind of internship during these holidays and applied for a one in the Himalayan region. The project was from the Rufford Foundation and its title was Firewood for Fuel. The project was based in Rudranath and Tungnath meadow in Kedarnath Wildlife Sanctuary, Chamoli District, Uttarakhand state. So I packed my stuff and left for the Himalayas!

From Sagar to Rudranath

Rudranath is Lord Shiva’s Temple located at the elevation of around 3700 meters. Initially, it was very difficult for me to trek along with the 8 Kg rucksack as the trek was steep initially up to our 1st destination which was Chandakoti (2050m). I somehow was able to reach that place and then we had the Burans juice (Rhododendron arboretum) which was like one of the best juice I had to date. We reached our 2nd place Pung meadow (2297m). Then the next day we left for Molikharakh and Laviti (3206m). Then we reached Panar (3480m) where we stayed for 1 day and next day we left for Panch Ganga (3679m) and then finally to Rudranath (3679m). While coming back we stayed 2 days at each settlement and collected data for 2 days each.

Trek from Pung to Molikharakh (Photo By Akash Verma)

The Rudranath ecosystem is primarily alpine forest and shrub. Above the tree line Rhododendron campanulatum also known as semru locally, is the dominant shrub vegetation. Semru was the primary source of firewood and according to them it almost takes four years to completely dry. The place supports the rich diversity of Wildlife. I saw Himalayan Tahr, Barking Deer, around 50 Species of Himalayan birds.

Talking about the local food the one dish which I liked the most was the “chosa” a simple mixture of many lentils and also the dish made from the fern plant. Although the simple Maggi at the settlements was also like the best thing you can have, high up there.

My Work as a Volunteer

Our work as a volunteer was to measure the amount of firewood used by each settlement in one day in Rudranath region. And to identify the species used for the firewood. The amount of firewood varies according to the number of tourists and the weather conditions which can sometimes lead to the higher consumption and can lead to deforestation in that area. We asked them the species that were used as a firewood and also if there is any kind of conflict with locals and forest department for the collection of woods.

Due to excessive consumption of firewood in the higher altitudes, it can lead to the deforestation in the near future. Also, these settlements cannot be removed as these are the only places which can provide accommodation and food to tourists in the remote areas. Therefore, this project will help to develop the alternative way to use the firewood in a sustainable way. Most of the owners of the settlements were ready to adopt an alternative way for the consumption of firewood and also we told them that how it can help to save the environment.

Besides these local issues of habitat loss and deforestation, poaching is the one main issue told by the locals and is much observed during the winter season when snowfall is there. The musk deer is the commonly poached animal at higher altitudes. Also, the human-animal conflict is quite high in these areas. As told by locals the human-bear conflict is most common at higher altitudes and at lower altitudes, the rhesus macaque and central Himalayan langur is the one which is causing damage to the crops.

As I was done with my 1st internship, I had still one month left before my college gets started. So I got this opportunity to volunteer for 1 month for studying the social behaviour of Central Himalayan Langur (Semnopithecus schistaceus). The study site was the beautiful Mandal valley with surrounding mountains, rivers, and forests.

As a volunteer, I was assigned to scan the whole troop that is to record the activities of each member of the troop like what are they doing, on what species they are feeding on and what all other interactions are taking place among the members of the troop.

Since the villages are located within the sanctuary, therefore, the conflict between langurs and humans is quite high. Langurs sometimes raid the crops as they have to keep changing their place and also they sometimes feed on the fields.

An experience to remember

I will cherish this whole experience to the Himalayas for my whole life. I feel myself to be lucky enough that I got the chance to work there and not only 1 but 2 volunteering opportunities in the same region. This whole new experience taught me many things. I came across the beautiful Garhwali culture and people. It is amazing to see how people are living in those harsh conditions and are well adapted. The food, places, mountains, glaciers, rivers and everything were unique in its own way. I also went to Tungnath and Chandrashila peak (4000m) with my fellow volunteers. And I wish to go back to the Himalayas again so that I can again feel that beauty and can see the nature and wildlife in its best way possible.

Read also: A Trek to the Double Decker Root Bridge of Cherrapunjee 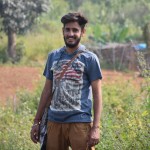 About the Author / Prashant Mahajan

Prashant, a graduate student of B.SC Zoology(H) from Sri Venkateswara College, University of Delhi and now pursuing masters in Wildlife Sciences from Aligarh Muslim University. A wildlife enthusiast who writes about the wildlife-related issues and also about his experiences in wild. Want to be a wildlife journalist and want to spend his life in the conservation of the endangered animals.

Only over a thousand mountain gorillas exist in the wild today, with about half their population concentrated

In the Heart of the Jungle

With a reputation of being one of the oldest tropical rainforests in the world, dating back to