Painting the sky black and white

This year I have seen the same wave of feathers, rather a larger wave of black & white feathers, circling the blue sky. Last year in August, I visited the sanctuary and witnessed the largest migration of Asian Openbill Storks in India from South Asia & coastal regions. Memories of flocks of Openbills enticed me to visit once again and I was at Kulik Bird Sanctuary in the same month this year also.

Established in 1985, Raiganj Wildlife Sanctuary is popularly called Kulik Bird Sanctuary in West Bengal. It is considered as the second largest bird sanctuary in Asia covering an area of 1.30 square kilometre in which 1.16 square kilometre is buffer area (286.23 acres) and 0.14 square kilometre is the core area. The sanctuary is home to 164 species of birds and also other species like Jungle Cat, Jackal, Snakes and the rare Yellow Monitor. Birds like Egrets, Herons, Eagles, Kites, Woodpeckers, Parakeets, Kingfishers, Owls, Drongos, Cormorants and much more are seen here. But the main attraction is the monsoonal migration of Asian Openbill Storks, counting not less than 60,000 every year. According to a census in 2005, 51,448 Asian Openbills visited the sanctuary that year. The number was slightly lesser in the following two years. In 2008, visiting openbills’ count went up to 59,000. Last year it was almost 65,000 and this year, the number was even bigger.

The sanctuary is situated under Karnajora Range of Raiganj Social Forestry Division. The vegetation here is quite diverse- various wild medicinal plants as well as high density of shrubby plants of different types. A large number of tree species are found here along with some exotics like Eucalyptus & Cassias, which are available with a high degree of consociations. Rare plants of potential conservational values are also found here, which contribute to making this sanctuary a paradise for exotic birds of the migratory kind. A large number of water bodies filled up by the water of Kulik River, add to making this a favourite place for migratory beauties. The core area is located in the centre surrounded by water. Normally, the Openbills start to visit the place from the end of May and keep coming till July every year, from South Asia and Coastal Regions. They stay here for 5-6 months and begin their return journey from here in the month of December. The nesting time is from July to August and egg laying from August to September. Parent birds then train their children to fly and the families together leave the paradise of Kulik around Christmas.

One of the largest bird sanctuaries in Asia, Kulik has the biggest colony or Heronry of Openbill Storks in the continent. According to Wetland International, the global population of the Asian Openbill is estimated to be 130,000, and around half of them live in Asia. This species breeds in a colony or Heronry, which are very few in India, particularly those that are well protected against human greed. Ornithologically, Raiganj Wildlife Sanctuary is a heronry of great importance. As per the breeding population data of Asian Openbills, the sanctuary reveals that it regularly supports 30-40% of the existing population of Asian Openbills of South Asia. Such percentage of Asian Openbills is what makes this Sanctuary an internationally important heronry. 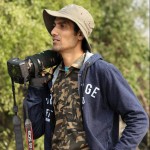 About the Author / Ananda Banerjee

A passionate photographer by hobby turned out as a professional photographer in the field of tourism, commercial campaigning & events. I love nature & wildlife and try to depict the stories of wilderness.

Migratory birds, their nesting habits and patterns as well as conservation of avian life in Telineelapuram, Andhra