A tale of devastation and rejuvenation, Sariska emerged like a phoenix to rise from being a tiger-less reserve to becoming one with a booming population of the majestic felines.

Sariska and Ranthambore along with newly formed Mukundra hill, forms the prominent tiger reserves in the desert state of Rajasthan. Sariska, being one of the first park in the country, actually dates back to 3139 BC during the Mahabharat era. With the centuries that passed by, Sariska became a hunting ground for the Maharajas of local princely states. Sariskawas established as a Tiger Reserve in the year 1978.It is surrounded by Aravalli hills and is located in Alwar district of Rajasthan. With an area of 860 sq km, which is much larger as compared to Ranthambore, Sariska boasts of a wide variety of faunal life. Other than the famed tigers, there are found leopard, chital, sambar, nilgai, jackal, hyena, wild cat, civet, langur, who thrive in this habitat.

In the year 2004 Sariska’s original tiger population was wiped out on account of rampant poaching. It was an incident which really shook the whole nation. The park authority had simply no answer and was left clueless. Along with Sariska, Panna also became victim of poaching activities and was decalared tigerless. In fact danger was down the corner across each and every tiger reserves.

Pressure was mounting on the state and central govt. to respond as soon as possible. Finally in 2008-2009 with a first of it’s kind move, Rajasthan forest department with centre’s permission decided to translocate a male and a female tiger from Ranthambore to Sariska. By sheer hard work and meticuously proper planning, the tigers were released in Sariska . Still it was not over yet, as the very first tiger that was shifted to Sariska was poisoned by the local villagers. Gradually with help of local NGO’s, forest officials were able to shift few of the villages outside the park that are located inside the core area. As a result, within a span of 10 years,Sariska is now roaring with 19 striped felines.

I visited Sariska for the first time way back in 2002, which, incidentally, happened to be my first visit to any Tiger Reserve. Since then I visited Sariska 7 times though I wasn’t lucky enough to spot a big cat. Recently, I decided to pay another visit to this park, since chances of tiger sightings had improved in recent times.

It was at the end of March 2019, when we journeyed one early morning from Delhi to comfortably reached our destination by 10:30 am. After having lunch we were picked up by our gypsy and started our game drive. The weather was literally hot with strong winds blowing, but you can’t complain as it is quite common in Rajasthan during this time of the year. We were informed that a tigress named “Tiny Tail” aka ST-9 had been sighted continuously. After spotting jackal, sambar, herd of chital we headed to the place where ST-9 was sighted that morning.

After reaching the place we saw forest staffs using radio telemetry device to identify ST-9’s location. When asked about the tiger’s movements, we were informed that it was sleeping in a bush. Hence we didn’t have any other option but to patiently wait there. Suddenly one of the gypsy driver pointed towards a bush atop a cliff. Our guide was elated to inform us that ST-9 had started moving.

When the majestic female came down right in front of us I was completely bedazzled by the magnificent sight. It was full grown tigress with a radio collar tied around her neck with a short tail. It started walking down the track, spraying on a tree and finally sat in a water-hole  for cooling. What a feeling that was as finally I saw a tiger for the first time in a reserve which I had been visiting since the last 17 years.

Sariska’s passed through many hurdles, one after the other, to finally come out triumphant. I believe that a lot of work yet needs to be done, to make it a truly world class tiger reserve like it’s bigger cousin (Ranthambore). But all said and done Sariska’s revival has given us a hope for a great future. 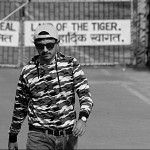 About the Author / Soham Chakraborty

Basically an electronics engineer and worked in a marketing firm for a while, but being a wildlife freak had to quit my job and ultimately joined WTI(Wildlife Trust Of India) as an intern for seven months. Currently in Pune pursusing M.S.c in Wildlife Conservation Action from (BVIEER, ).

A chance encounter with the matriarch striped feline and her cubs forms a great tale to tell,

A Walk to remember

It is often said in the jungles that while you might not always spot a tiger, he