In search of India’s avian treasures – Lesser Florican and more

A trip to explore Nature in India is always exciting and often adventurous. A two-day trip to Sonkhaliya, meticulously planned by my friends and co-travelers, Adesh and Mandar, was one such unforgettable experience.

We boarded Ajmer Express from Dadar station at 14:30 and reached our destination, Ajmer, at 08:15 the following day. Our accommodation, Hotel Neel Kamal was only five-minute cab journey.  After packing up our travel essentials, binoculars, cameras, scopes and having our breakfast, we were ready for Day 1.

At around 9:45, we started on a two-hour journey to our ultimate destination, Sonkhaliya (pronounced as so-kh-lia), which is around 40 km from Ajmer. Force Trax Cruiser is the best option to travel in the fields.

Why is Sonkhaliya considered the best suitable place for Lesser Florican? Well, in monsoon  (July to September), the male lesser Floricans establish territories and compete to dazzle and charm potential mates with their aerial displays and fine plumage. This place is vast grasslands of the Moong and the Bajra cultivation. Moong crops require 90 days from the plantation and least supervision during this phase. Also, these crops need very minimal or no pesticides, hence the grasslands remain almost natural. The moong crops grow at a height about 1 to 1.5 feet. Lesser Florican male, when inbreeding phase, requires exactly the same habitat for his display. He is of the height 2 to 2.5 feet, can easily peep his head above crops and look out for female. When he spots one, he attempts to charm her with his display. The male Florican leaps 4 to 6 feet into the air in an energetic flurry of wings, and then swiftly falls back on earth, with wings tucked in.

Mr Lesser Florican needs a perfectly moist soil base to pounce, so right after or during the drizzle is the right time. If he senses any disturbance such as the presence of cattle or human, he will refrain from flying. Instead, he will hide in the grasslands. And Lesser Florican female residing in adjacent, dense bajra cultivation, would be watching displaying males. She requires such dense crops to lay and hatch the eggs. Rarely Mr. & Mrs Lesser Florican are seen roaming around together in open. Hence habitats, particularly like this, are utmost suitable for Floricans.

It is very important to maintain this habitat in order to aid rise in Lesser Floricans’ population and to ensure that birding tourism doesn’t intrude their lives. Kudos to Mr Rathodji; who plays a key role in monitoring ethical Florican observation and documentation and ensuring no one is allowed in close proximity to the bird (providing the bird with an undisturbed environment for breeding).

Although we started in search of the Lesser Florican, we could not miss out other scrub/grassland birds, which are in plenty in this habitat. Our first halt in Sonkhaliya area was at Loharwada, typical scrubland. We started birding and in soon after, we spotted Eurasian Collared Doves, in huge numbers, followed by Red Collared-Doves. As we walked along, we heard Rufus Fronted Prinia and Singing Bushlark. We also spotted Rufus Fronted Prinia, but no luck with Singing Bushlark. Great sighting, as the little one was collecting nesting material. After few yards we chanced upon Indian Bushlark, making his ‘parachute’ display. Crested Lark, Plain Prinia, Southern Grey Shrike, Grey Francolins, House and Large-billed Crow. We also spotted Painted Grasshopper and Grey Mongoose.

We had to put a pause to our excitement to take a lunch break at a nearby dhaba. Decent food it was and fuelled us well to restart the avian search.

Post lunch, we headed in search of Lesser Florican. All-ears for the frog-like sound, he usually makes while displaying. I had never heard that sound, so was not aware what was it like. We scanned two fields, then the third with no luck. A search continued, and suddenly at one place, Rathodji asked to halt. He must have spotted one, we thought in anticipation and he did indeed! There was a male Lesser Florican displaying, around 100+ meters away. His displaying sound was really filling up the silence beautifully. In the moong fields, he was continuing the act of display. I could hardly observe the male using my binocs but spotting scopes were real magic, as one could see the tiniest details of the bird. Through the scope, the male Lesser Florican was looking even more graceful. Blackhead and neck extended. White collar and wing coverts. And those ribbon-like plumes. It was a really beautiful experience to observe this magnificent bird. It was at a distance, we were very keen to get closure look. We continued scanning from our vehicles. On the way, we spotted Baya Weaver males, in beautiful yellow, in breeding plumage. We stepped down at one place to check if Florican is near-by. While searching for Florican, to our surprise we saw Red-Headed and Black-Headed Buntings on the Bajra cultivations. A few yards ahead, Singing Bushlark was beautifully perched. Singing Bushlark was so friendly that I managed to get some decent shots with a great background. Search for Florican continued, but no luck again. Purple Sunbird was feeding on nectar. As it was around 5 in the evening, we decided that will continue the search early next morning. As that time is best suitable for Florican to display. We headed to another area for the Indian Eagle Owl – large, cat-sized owl with fiery eyes and flamboyant look. Initially, one was perched on the tree, but then an owl flew into its habitat, grasslands with shrubs. It was great experience watching this Owl. We returned to our hotel room happily with images of the owl’s fiery eyes in my memory.

We reported @5:15 to start our exploration. We skipped breakfast to be able to reach the destination sooner. We reached by 7:00 and started our search again immediately. Common Babbler, Rock Bush Quails and Grey Francolins crossed our paths several times. Painted Francolin was calling impatiently. After around 30 minutes, we heard the sound, and it was Lesser Florican. So close that we didn’t even need binoculars to watch his uninterrupted display. Closer proximity to the displaying bird, allowed us to capture images from all angles from inside the vehicle itself as we didn’t want to disturb this beauty. Slowly and one by one, each of us came out of the vehicle to observe Lesser Florican from spotting scope. And WOW, it was spectacular to watch this bird from the scope. It was quite a challenge to capture while he displayed. Since Lesser Florican’s moves are unpredictable, so we had to constantly be watchful to guess his next jump and try to get the subject in focus. And just pray that our predictions match with Florican’s move. This Lesser Florican obliged me with ample opportunities to capture still images and videos with all possible combinations of camera techniques. We spent around 2 hours observing and photographing this bird. We even started having our packed food, as, by this time, the bird had been comfortable with our presence. What an amazing experience of ‘breakfast-with-Lesser-Florican’. Also spotted Rain Quail and later Streak-throated swallow and Wire-Tailed swallows. We then proceed towards another area to try our luck to see Savana Nighjars and hoped to spot Painted Sand Grouse. We were actively looking for these species and then spotted a Savana Nightjar, beautifully camouflaging, making it challenging for us. We were lucky to see two, resting under canopy shadow. On the way, we saw Greater Painted Snipe pair, Comb Ducks, Lesser Whistling Ducks. These birds were near the lake areas. There was a Little Grebe swimming along with her floating nest. Thais active nest containing 2 eggs. We heard Lesser Whitethroat and others that were spotted previous day – Long Tailed Shrike, Swallows, etc.

While we continued to watch birds, to our surprise, two Greater Flamingoes flew over. We all surprised flamingoes in this area at that time is a rarity. They flew over the water body and disappeared. Another rare bird that surprised us was Southern Grey Shrike but was leucistic. This shrike was hovering over grassland for couple minutes, perched on a branch and then flew away. It was time for a lunch break and we headed to a nearby dhaba.

Post lunch, we decided to try our luck for Painted Sand Grouse and Bristled Grassbird. On the way, we saw Prinias, Swallows, Doves, and other species. We took a halt near a water body to observe waders. There were Asian Spoonbills, Egrets, and Herons. We observed Common and Spotted (non-br) Redshank, Green and Common Sandpiper, and Black-winged Stilt. And there was a Ruff standing alone amidst these birds. Not to forget, a special appearance by Blue Cheeked Bee-eater, 2 juveniles, possibly practising the art of hunting. After a group photograph, we headed further, spotting a lonely Pheasant Tailed Jacana on the way. We stepped out on a patch and were looking for Bristled Grassbird, but no luck. I kept clicking photos of Rufus Fronted Prinia, which was posing like a star.

And then suddenly Mandar started following a Blue Throat sized bird. That bird seemed unusual to Mandar and we joined him to get a glimpse of it. And oh my god! To our utmost delight, it was confirmed to be Rufus Tailed Scrub-Robin, a passage migrant. It is very rare to see this bird as they migrate from north of Asia to African continent. Rarely and for a very short period they pass through North-West Gujarat and Rajasthan. This sighting felt like the cherry on the top. What a fulfilling trip! We certainly could not ask for more.

It was almost 17:00, and we needed to head back to freshen up and board Ajmer BDS train at 20:30. Before boarding the train, Adesh and Mandar took us for rewarding refreshments after such a fruitful trip. Dahi-Kachori, aloo-tikki chat was part of the main course followed by malpua and mouthwatering Matka lassi with extra Rabdi topped with malai ☺

Read also: Exploring the best of avian and wildlife in the foothills of Himalayas 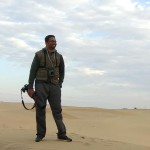 About the Author / Rohit Hirway

Rohit is into software technology by profession and education. Started with tiger reserves, which was the reason to fall in love with nature and its beauty. And now feathered beauties have attracted him more; to observe and capture them.

In a successful joint operation led by Delhi Zoo and Wildlife SOS, a Greater Flamingo bird that

Musings in the wild

Lesser Florican-a bird lesser than none!

The lesser floricans (labelled as “Endangered” by IUCN) were estimated by Wildlife Institute of India (WII), Dehradun