Survival of an endangered species in the human world

India’s marine life loses a large number of sea turtles and their eggs every year on the coast of Odisha and West Bengal. Kaushik Mukhopadhyay urges the conservationists to implements policies and processes to protect them.

Over the last couple of years, conservationists have been finding ways to protect the endangered Olive Ridley Sea Turtles (Lepidochelys olivacae) on the  Odisha beach.

The serene Gahirmatha beach on the Indian Ocean is world renowned as the largest rookery of endangered Olive Ridley Sea Turtles. In winter months, thousands of Female Olive Ridley Sea Turtles swim out of the sea onto the sandy beaches. They dig out pits in the sand to lay their eggs and then cover them to camouflage and protect from Wild Boars, Fishing Cats, Jackals, Monitor Lizards, and other predators. Subsequently, they return back to the sea.

This phenomenon of mass nesting by a large number of Turtles together is known as Arribada in Spanish. Last winter, over a million of them, nested along the coast of Gahirmatha Beach, south of the Bhitarkanika National Park in Odisha.

This year, in winter, a massive number of 3,55,000 eggs were recorded from the beach at the mouth of Rushikulya River. Such statistics raise a strong hope that a substantial number of hatchlings survive threats for life from both egg-eaters and as well as predators, such as birds and crabs. Hatchlings emerge from these eggs after 45-60 days and the babies grow without having their mothers to tend to them. When the newborns head for the sea, they face danger from predators like Shark. Those who survive, take nearly two decades to reach their reproductive age and usually return to the same beach to lay their eggs.

Sadly, humans continue to be one of their biggest threats. A large number of them are killed due to unauthorized fishing boats, nets, as well as illegal poaching.  Olive Ridley Sea Turtle is considered a protected animal as per our Wildlife (Protection) Act (1972) and is categorised as “Vulnerable” according to the International Union for Conservation of Nature Red List. Olive Ridley Sea Turtles are migratory species that are protected under the Convention on the Conservation of Migratory Species of Wild Animals and Convention on International Trade in Endangered Species of Wild Fauna and Flora (CITES).

Getting caught in fishermen’s nets is one of the major reasons for a large number of Olive Ridley Sea Turtles dying every year. Perhaps the largest threats are shrimp trawling nets, where the turtles get entangled and being air-breathing reptiles, they drown in the struggle. The United States of America has banned or restricted the trawl nets for shrimps from countries, which do not use Turtle Excluder Devices. When attached to the nets, TED allows the turtles to escape.  The seas along the major egg-laying beaches where the turtles nest, are also a major hub of fishing boats in the breeding season. Although India has made compulsory to use TEDs on all nets, execution is difficult to monitor, as fishermen believe the nets reduce their catch.

In a 3.5 km stretch of Mandarmoni sea beach in West Bengal, according to our GPS readings, I have personally witnessed more than 20 skeletons of Lepidochelys olivacae during Waterbird Bird Census organized by ‘Prakriti Samsad’ of Kolkata and by ‘Narora Atomic Power Station’. And that’s just my own findings. I am sure others must have seen more.

Read also: Camouflage – The Art of survival in the wilderness 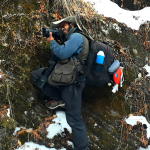 About the Author / Kaushik Mukhopadhyay

Kaushik is a full-time nature, wildlife and adventure photographer and a filmmaker. As well as a known mountain sports athlete because of his efficiency to capture specific frames while climbing in extreme high risky environment. When exploration is a basic phenomenon then nothing can stop him to explore the biodiversity ranging from sea to the mountains, helpful for conservation.

In honour of International Women’s Day, we at Saevus celebrate all the women at the frontlines advocating