Keats had said, “Now a soft kiss – Aye, by that kiss, I vow endless bliss”. Lessons in courtship from nature, captured in the frame for posterity.

I was on a trip to the Joypur forest (of West Bengal, India) one lazy summer weekend. Being an avid insect lover and specializing in insect photography, I always look for my subjects in every possible nook and corner of the forest greens. Not necessarily are they found only in the greens; they amaze me even in the browns and blacks with their surprise presence. The month of June seems to be sweltering as I struggle to beat the heat and get my gear ready.

That morning I was on my search, as usual, geared up to capture the best. I moved from the green vegetations to the deep…towards the dry spikes that had lost their gloss but was infested with mosquitoes which took more of my attention. As I moved ahead, it felt as if they were happy, welcoming me in swarms. Then suddenly among the dry bushes, some movement caught my eyes. I ignored the welcoming gesture of the black mosquitoes and readied my lens. The sight that followed, left me in awe of nature…

A couple of signal flies had caught my attention. These little creatures are known for their colored and shaded composite eyes, but more for their elaborate heavy mouths. Having read about them, my knowledge had already created in me an inquisitive eye but what I was about to witness would leave me with lovely memories for life.

The signal flies are famous for their courtship behavior and mating style. The couple in front of my lens kept dancing around and occasionally coming close to each other. Zooming in, I observed what can be best described as a loving gentle kiss…their ornate mouths closed in on each other as the male tried to woo his mate and danced around for a couple of minutes more. The wings flapped at an unimaginable speed that my lenses missed to capture them. This habit of extreme flapping of wings to signal to their mates, I suppose, must have helped the biologists coin the name Signal Fly.

The beginning of courtship ritual

Once the female is convinced of the partner with the signals which only she can understand, she positioned herself and let the male ride her. The human world fails to decipher the love that got enacted in front of my lens. The male positioned himself but first kissed the female, comforting her to the best of his ability (I missed that shot as I was unable to reach such close focusing distance by crawling). Courtship over, the mating thus began…

I am not sure if they could observe me following them, they kept moving on different branches occasionally. The oppressively hot weather had ensured that they have enough dry twigs and branches to play around. As the sun rose and I got wet with sweat, I was determined not to lose their sight even for few seconds and kept trying to focus on my subject.

The female was convinced and allowed the male to ride her

The mating couple posed a great challenge to me as I had to crawl inside the bushes with my gear to reach my focal length with a presentable background…the dry spikes scratched across my face and the mosquitoes played truant. My skin burned and I could taste salt on my lips but nonetheless, I kept chasing them.

Around 35 to 40 minutes later, the mating seemed complete. But they would not let each other go till the male planted a final parting kiss and then it was over…quite unexpectedly. In the insect world, such demonstration of courtship is highly uncommon. I just lay there quietly for some time trying to absorb what I just witnessed.

As a photographer, my work of that morning gives me immense satisfaction with the series captured vividly through the lens. As I now go through the shots and slides and recapitulate the morning, I seem to have enriched myself with the knowledge and feel proud that I was allowed to witness such a natural act.

John Muir had rightly said: “In every walk with nature one receives far more than he seeks.”

Who can feel this more than me…thank you Mother Nature!

Cover Pic: The Male approached the female for a satisfying kiss 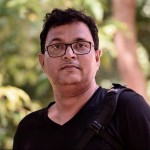 Close Encounters of the Small Kind

The Wandering Minstrels of Rann

The Indian or Asiatic wild ass is listed as Endangered by the IUCN, with its last refuge

Living in disguise – to survive or to prey

Some insects and animals use camouflage as an effective way to protect themselves from natural enemies. Camouflage