Swooping for a kill

A majestic bird of prey belonging to the Accipitridae family, the Crested Serpent Eagle(Spilornis cheela) is a raptor found frequently in Asia. What happens when you interrupt this fierce bird while it attempts to hunt for prey?

It was perhaps one of the most memorable incidents of my life as I got to witness a raptor in action! The day dawned as a fine and clear morning – most suitable for birding. I was on a bird photography trip with some of my friends along the outskirts of Pune. This time we had chosen a forest habitat to explore new area.

We stopped along a big stream as we spotted a huge Created Serpent Eagle perched on a tree along the road side. My friends went in search of other birds, while I stood on a bridge which connected two sides of stream holding my binoculars. The mighty eagle looked amazing through the binoculars. It was very silent and I could just hear the sound of the flowing water down the stream. There was some noise coming up from the dry leaf-cover which ran along the banks of the stream, which soon happened to be a result of movement of palm sized bull frogs.

There was a lull amidst all the sounds of nature, as if the calm before the storm. And suddenly the silence was broken! Small birds made alarm calls all around. In a matter of seconds, the peace and quiet changed to cacophony, as I looked left and right to spot the source of the unrest, found nothing and then looked straight ahead to see the eagle flying straight heads-on towards me! I had to bend down on bridge to avoid collision with the ferocious talons. For a moment I thought the eagle was in the mood to attack me, but it veered off in its flight path just two feet away from me. I had almost no space to maneuver my camera and just managed to see the eagle flying besides me. I heard the sound of its flapping wings as it passed me by. The majestic bird then perched on a branch just besides the bridge.

Now the second part of show started. I deduced that the eagle had different plans, rather than the one of attacking me. Since the early morning, this eagle had been observing the frog movements from the top of the trees. Its modus operandi was to attack the frog at right moment and right time. I stood up and walked on to the other side of bridge, crossing the huge raptor perched just 3 feet away. I called up my friends to witness this terrific scene about to unfold. In just a couple of minutes, the eagle glided down along the stream in its quest to catch a big frog. It missed the first attempt and perched on a big rock. It stayed still awaiting the right moment for a better opportunity. The frog tried to escape by jumping away and the eagle caught it in mid air itself. The eagle caught the frog in its mighty talons and perched again on same branch right in front of us! After few minutes the eagle went off flying downstream to have a safe lunch. It was an amazing experience for us, as we have often seen a serpent eagle hunt for snakes but this was a unique scene to watch serpent eagle hunt for frog. 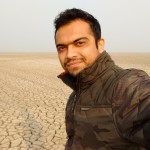 Asani Bhaduri, Ph.D., Assistant Professor of Molecular and Computational Biology, better known as a Half-mad K-no-w-mad is back with