Birding in the Land of the Monals

A walk in the clouds, trekking on the treacherous trails of Chopta to Tungnath temple while following the trails of the elusive Himalayan monal, makes for wonderful and poignant memories for the author and friends.

The sign on the road said, ”Life is a journey, complete it,” as our jeep sped its way to Rudraprayag. The turbulent waters of the Alakananda looked grim and intimidating, as it flowed along the road, throughout the journey. I have always had a fear of rivers, however big or small. I wouldn’t say fear, but a rather strong sense of insignificance in front of a force so huge! Before and during the journey, I was apprehensive of how the trip would be; would it be wasted due to the rains? Would landslides block roads and deter us from proceeding? Or worse, would there be a cloudburst like they showed in the news?

My thoughts were ironical, considering that me, along with Pavitra, were travelling to Chopta, to trek up to the Tungnath Mandir, the highest Shiva temple in the world. Ironical, because this fearful mind was travelling all the way from Delhi, to the temple of the Bhairav, the destroyer of fear!

After a long journey all the way from Rishikesh, which started at 4 in the morning, we reached Chopta at noon. Chopta is located in the Rudraprayag district of Uttarakhand, and is famous for the alpine meadows, or bugyals, the trek to Tungnath temple, and also for its bird diversity, which prompted yours truly to save up and travel here. After checking in to a decent guest house right next to the main road, we freshened up and decided to hit the trail in front of our hotel. The initial walk was amidst forested tracks, where a lesser cuckoo perched nervously in a tree, before taking off for a safer perch, while a mixed flock of Ashy-throated warblers, ultramarine flycatchers, and rufous-gorgeted flycatchers flew from tree to tree, their calls resonating in the silent road.

The road soon opened up to the first meadow of our trip, as the grassy slopes rolled down to as far as the eye could see. A few sheep and horses grazed far off, while Royle’s pikas scampered amidst rocks and the grass, chomping on the grass and being in a constant vigil.

Walking down the meadow, we came across a small stream, and a dense forest patch further ahead. We ventured inside, wary of leeches and slippery rocks on our way. A resplendent pair of yellow-billed magpies gave us a tough chase, while a noisy woodpecker kept itself busy by pecking high up on a tree.

Returning back to the meadow, we walked back to the trail leading to our hotel. This time, we took a different route and were surprised to find lots of bones of an ungulate lying on the meadow, bits and pieces of which were scattered in the greens. I explained to Pavitra that it could possibly have been the work of a Lammergeier, which usually throws pieces of bone, collected from a carcass, from high above, and once broken, the smaller pieces and marrow were eaten by it. By now, it had already started to drizzle, and we packed our cameras in the bag and started walking back to our hotel, when all of a sudden, we saw a pair of griffons soaring down to the meadow and landing at the exact spot where the bones were. I dropped my bag and ran near the spot, as another griffon, perhaps a juvenile, landed on a tree, observing its elders looking for leftovers. I forgot about the fact that it was still drizzling. I didn’t care. It was a perfect start to the trip.

The trek to Tungnath

Ever imagined waking up to the melodious call of the white collared blackbird? Yes, this high altitude bird was what woke me up early the next morning, as I freshened up and decided to head out. It was chilly, and my windcheater worked just fine. The sky was clear, and the road, empty. I walked on a different trail today, to the sight of rufous gorgeted flycatchers, the calls of the Himalayan and lesser cuckoos resonating from far away, and the mighty Chaukhamba peak lit by the first golden rays of the sun.

We started for the trek at 6:30 in the morning. The first leg of the journey was through densely forested patches. The trek route is well paved and marked, as horses carrying tourists ply the same route.

After a kilometre of the walk, straining our ears to the various bird calls emanating from all around, we reached the meadows, and to a cosy little tea stall, run by an old man and his wife. This benevolent and warm couple served one of the best cups of tea I have ever had, along with a milk based sweet that they make. We sat there at his little hut, overlooking the vastness of the meadow, as sheep grazed lazily at one end of the meadow, while clouds came and created a unique vista with the mountains. As tourists started to pour in and crowd the place, we hit the road again.

The scenes changed, with the road being lined with mid-level rhododendron trees. Occasionally, Pavitra would shout out, “wo dekh Ullu!” (Look, there’s an owl!). I recalled how this same individual, enthusiastically looking out for birds every now and then, told me at the start of the trip, that I should focus on things other than birds. I looked at the ‘owl’ with a smile, amazed at his happy demeanour.

We walked on, the increase in elevation now very apparent, as we stopped to catch our breath every now and then. At one of the stalls further ahead, while I pondered whether to try out the rhododendron juice, Pavitra called me excitedly, saying ” ye dekh!”. I walked up to him, and there, just below the stall, was a flock of pink browed rosefinches happily foraging amidst the grass and wildflowers. The beautifully coloured male was bold, while its drab lady friends restricted themselves to the bushes.

As if the birds weren’t enough, the stall keeper shouted at us, beckoning us to come to him fast, while he pointed at something huge that ran away to the other side of the meadow. “Bheriya!’ he exclaimed, as we stood there, dazed and confused at what we just saw. Could it really be a wolf? It wasn’t a dog for sure, considering its size..With doubts in our mind, we hit the road again.

Now, I need to mention here that Chopta is one of the best places in India to try one’s luck at spotting the Himalayan Monal, one of the most beautiful avian denizens of the Himalayan belt. Although I had seen a Himalayan monal in Triund last year, I wanted to see it once again. At one point during the trek, we heard a group of tourists further ahead of us exclaim ‘monal!’, while they pointed towards the meadow. We knew we couldn’t catch up to them and see the monal, so we decided to approach the meadow from a side trail further downhill.

Hitting the trail, lined with mid-level rhododendron bushes, we looked around for the monal, which was gone by then. We started returning back to the main trail when a small jet of blue flew by and went inside one of those bushes. I waited for it to come out and sure enough, the beautiful Himalayan bluetail came out of the bushes and perched right in front of me. The Himalayan Bluetail, with its strikingly beautiful coloration, gave me ample time to shoot it before it flew off to its mate.

No, we didn’t see a Himalayan monal throughout the trip, and that is perhaps a good thing because a bird like that isn’t supposed to be guaranteed, but rather memorable only if seen in the most unexpected and sudden manner, maintaining the elusiveness that this bird holds.

We reached the Tungnath temple premises very soon. The temple premise, unlike other temples in India, was clean and quiet. We had a lunch of aloo paranthas from a stall near the temple, and after resting for a while, observing a resident white capped restart busy collecting food from anywhere it could reach, we resumed our trek.

The next leg of the journey, from Tungnath to Chandrashila peak, at 13000ft, was surprisingly treacherous. There was no paved route, save for a few arbitrarily placed stones that demarcated a trail through the meadow. The weather was much more chilly, and walking on the slippery track, with the mist constantly covering up everything in its way, proved to be tough. We sat in the meadow, the mist coming onto us like a cold rush, while the soft buzzing of the bees and other pollinators added a soft rhapsody. At times, I wondered whether it would indeed be worth the effort to go all the way up to the Chandrashila peak. There were many moments when I wanted to suggest we turn back. But then, I recalled that quote en-route Rudraprayag, and somehow, it kept me going.

We reached the Chandrashila peak at 1 pm. I felt victorious. In spite of my fears that I had throughout the trip, I made it to the top. I don’t know if it was worth the effort, but reaching the top made me realise that sometimes, it is very easy to give up for the fear of what lies ahead, even at the last moment. But having the will to go on and complete it, is what makes it worthwhile, just like Sam quotes, “But I think, Mr. Frodo, I do understand. I know now. Folk in those stories had lots of chances of turning back, only they didn’t. They kept going.”

As we returned, I thought of how the Bengali tourist behind us commented about a ‘peacock-like bird calling from the edge of the cliff,’ minutes after we passed that area, or how we narrowly missed out on the canid species near the stall, and how, surprisingly, it did not matter to me at all. For one thing, I was returning back a much stronger person, taking back with me more than what I had ever hoped to get. Be it a bag full of lifers, the highly fulfilling trek or just memories of sitting under the stars, wrapped in blankets, talking and laughing with good friends. 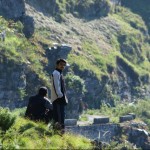 About the Author / Sutirtha Lahiri

A Masters student at the Wildlife Institute of India, Sutirtha Lahiri's interest lies in ecology, writing, exploring new places and is mostly found with a cup of tea.

Asani Bhaduri, Ph.D., Assistant Professor of Molecular and Computational Biology, better known as a Half-mad K-no-w-mad is back with

Only over a thousand mountain gorillas exist in the wild today, with about half their population concentrated